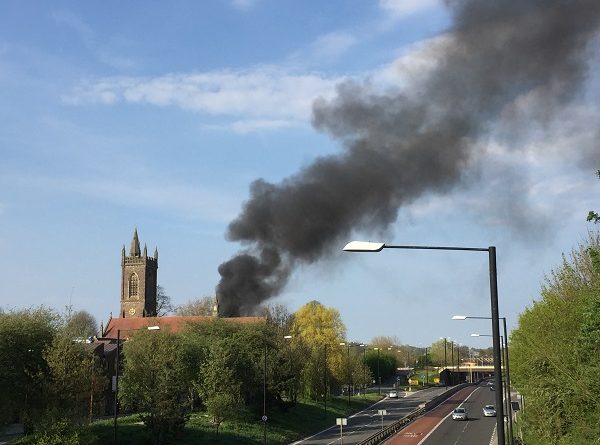 A plume of thick, black smoke could be seen across the city this afternoon after St Paul’s Adventure Playground in Bristol was set on fire.

Just after 5pm, smoke began rising from the side of the M32 in St Paul’s, which was quickly attended by emergency services. The M32 remained open though part of Newfoundland Road and Fern Street was closed by police.

Crews from @AFRSTemple @AFRSSouthmead @AFRSBedminster are attending a fire in the St Agnes Park in St Paul’s involving playground equipment , 2 breathing apparatus in use and 2 x 45 jets in use #StayHome pic.twitter.com/AbhNOgbrTM 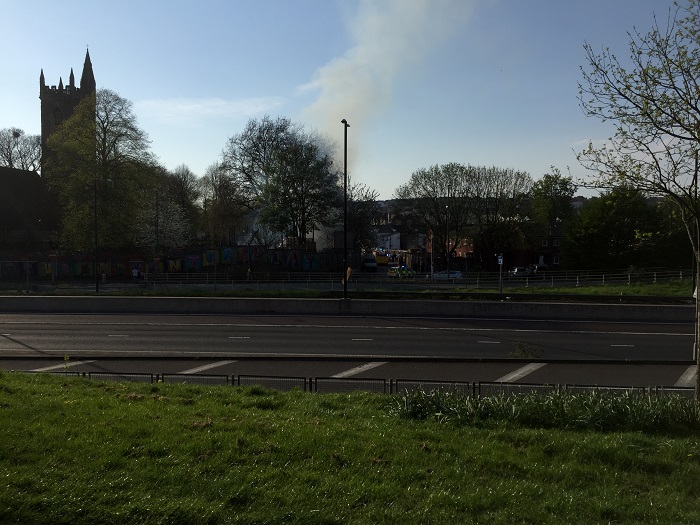 At the time, Assistant Chief Fire Officer for AF&RS, Simon Shilton said: “It is so disappointing to see that at a time when we all need to be coming together to support one another we still have people committing crimes and ruining our local communities.

“We often attend fires that are started deliberately that present significant risks, not only to those that start them and are around the area but to the crews that are sent to tackle them.

“Now more than ever we would urge people to not start a fire intentionally as it could have severe consequences. Not only is it a crime that can carry a significant sentence, but our crews would potentially be unable to get to another emergency.” 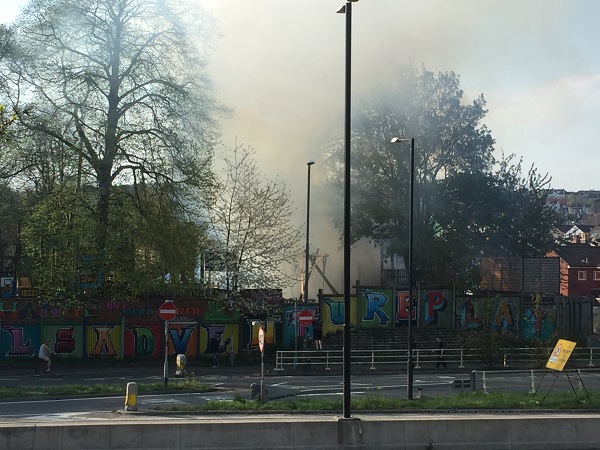 The fire damage to the much-loved park will come as a blow to local residents. The playground has been a community space for over 30 years, but has struggled to keep going in the wake of play funding cuts. In September 2019, the playground teamed up with Team Love to put on an event headlined by Roni Size to raise money to keep the playground open.

Chopsy Baby’s Jen Smith witnessed the incident saying: “It was incredibly sad seeing the adventure playground in flames. It’s one of the best open spaces for children to explore, many of whom like us live in flats with no outdoor space. We often used it on Saturday mornings when they ran a closed Send session for disabled children. My children were in tears when they saw what was happening. I know the community will want to get behind the park to make sure it’s able to open its doors again.”

Are all theatres now basically using the Nimbus access scheme? Because you can have a massive serving of Bite Me. Nimbus is apparently an organisation of disabled people. So how did it manage to come up with loads of ableist crap: https://www.accesscard.org.uk/faqs/

Doctor Who Filming Set Up in Bristol
YouTube Video VVVFcUYwYXAtdnlpLXozWUtrNENqc3F3LlBwSW15VkpYazFF

All Saints Lane doesn’t take much dressing to tr

The best place to see the sun setting today is in

Love the view of Weston Super Mare beach from the